Written by Hippo (a hippopotamus) and Al (a bird)

I’m lazy. It’s true. Until Al and I started looking into the back-breaking human way of growing food – digging and hoeing and plowing and turning – I never would have imagined it could be so hard to get something to eat. But, as you know, Al and I are trying to understand this human way, so even though there is plenty of grass around for me to eat, and plenty of ticks and dead skin for Al right on my body, we have been digging and weeding and toiling and . . .

Al started jumping around on my head. “Hippo!” he interrupted, “you are prattling. Tell them about no-till!”

“I’m getting to that, Al. They needed a little background.”

Simply put, no till farming is the practice of planting crops without tilling the soil. It is letting all the little creatures who live in the soil (and love to dig) do the digging and I’m all for that.

“I’m imagining an underground world of tiny things digging away with even tinier shovels,” said Al.

“Just think of it, Hippo – millions of mites, worms and ants – all digging! My mother always told me that ‘many beaks make work light.’ She learned that from Mother Nature.”

“Mother Nature is awesome,” I said. “And you are right, Al. There is a whole world that lives in the soil – bacteria, fungi, earthworms, insects and thousands of others, working together in a truly elegant system that not only provides grass for me to eat, but also cleans the air, regulates temperature, treats ‘waste,’ and stores water and carbon.”

“I keep hearing the humans talking about droughts and reducing carbon dioxide in the atmosphere,” said Al . They should pay attention to this underground web of life, Hippo. It could help!”

“The catch is that all those soil creatures need to be fed to keep them going.”

“Don’t worry, Al. It’s all provided through the soil food web. Here’s an illustration of how it works:” 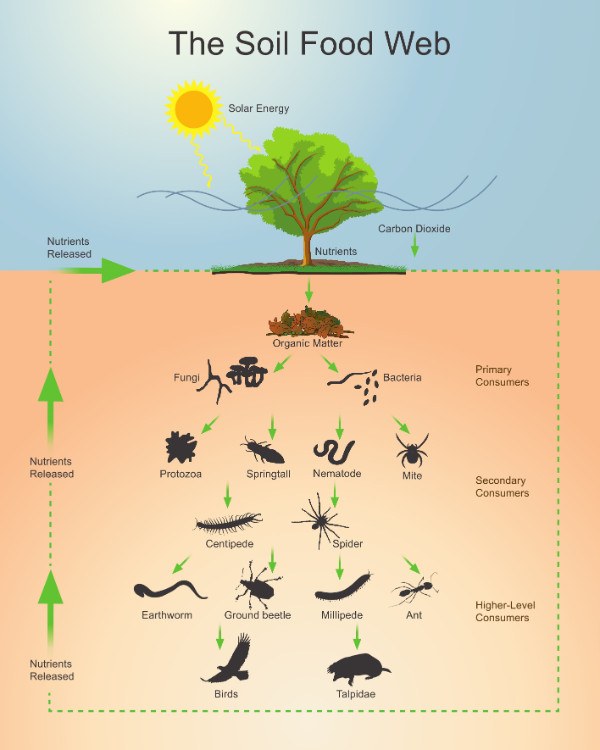 Every strand is needed to keep the ecosystem functioning most efficiently and if we till the ground, we disturb the strands. After tilling and growing, and tilling and growing, year after year, the soil becomes lifeless. We might keep it going for awhile with synthetic fertilizers and pesticides, but it will continue to lose vitality. This is a major cause of poverty and, according to the book Dirt, The Erosion of Civilizations by David Montgomery, also a prime cause for the collapse of civilizations.

With no-till, gardeners work with the soil web. Instead of digging, they provide organic matter to the surface of the soil.

“Food for the undergrounders!” squawked Al.

And then it all happens miraculously.

How to Do It

Al and I want to try this! We watched lots of videos as we tried to figure out how to make a no-till food garden in our weedy patches in the yard. We like this one with Charles Dowding:

Al and I will have photos and much more to say about this as we put it all into action. Stay tuned.