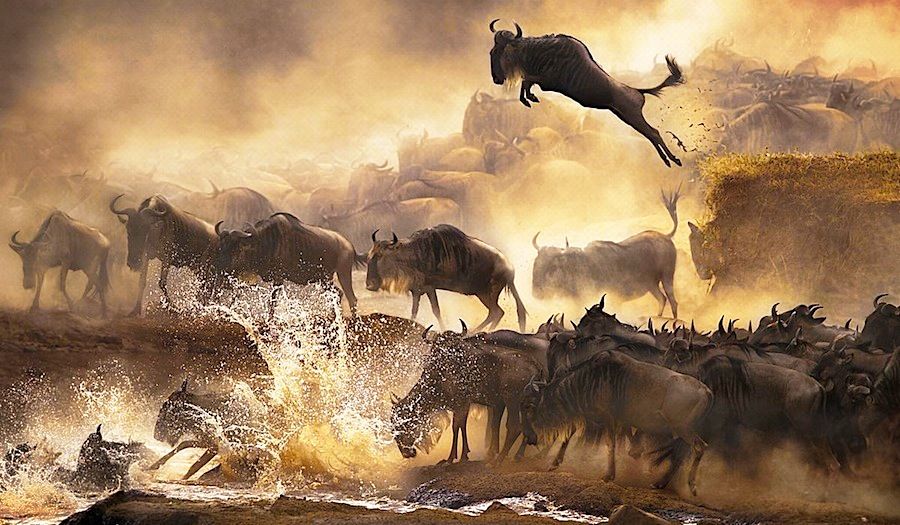 Back under the Baobab tree, the animals listened with wide eyes to our true tales of whales in the oceans and invisible creatures under our hooves, but few believed our plan would work. “A leopard never changes its spots,” said the gazelles and the wildebeests.

“We are not trying to change human nature,” said Al, “only a food system that doesn’t even serve them well.”

“Only an entire food system,” scoffed the cheetahs. “Impossible!”

Things looked bad for us. We hadn’t slept in days and were running out of ideas.

Then I heard a small voice. “It’s possible one drop at a time.”

It was the tiny sun bird. “The hummingbird is right,” he said. “It’s possible one drop at a time.”

“Or one trunkful at a time,” affirmed the elephant.

“Or one bite at a time,” smiled the old crocodile.

Stillness settled over us as the sun slowly sank into the Earth. A golden pink enveloped the land. It seemed no one else would step forward to speak.

After what seemed a blue moon, a wildebeest rose. Al gave me an encouraging peck.

“I’m only one,” the wildebeest said, “but every year, I join together with two million other grazing animals – wildebeest, zebras, gazelle, impala, and eland – to create the greatest land migration on Earth. The ground shudders as we all travel 1800 miles across the grasslands, across the crocodile-infested rivers, following the rain which gives us food and water. We get hungry and tired, but we know we cannot give up. Our future generations depend upon us.”

After another silence, the wildebeest had more to say. “Future generations of all species may depend on our actions today. We must all stand and walk.”

Al and I barely breathed.

I looked around at our friends, great and small. One by one, and group by group, aardvarks, baboons, birds of every color, elephants, frogs and toads, tortoises, warthogs, dragonflies, snails, zebras, and all the rest were rising up like a giant wave.

As the twilight deepened, fireflies flashed their lamplights on and off, again and again. We could not believe our eyes as even the lions finally stood – even the lions!

I thought of my dear mother’s tale of the guiding spirits of the wise old baobab tree. Perhaps it was true, after all. For whatever reason, on this enchanted evening, Al and I were unanimously given a chance to get the humans to mend their ways. But it was not without conditions. The council strongly warned us that animals are increasingly in peril and time is of the essence. They required a progress report every new moon.

I opened The Secrets of the Savanna, by Mark and Delia Owens and, with the fireflies lighting the pages, began to read out loud:

“. . .  As the moon shadows embraced the river beaches and stretched their arms toward our shore, an elephant trumpeted in the distance. . .”

Round eyes shone throughout the gathering. Ten thousand stars filled the sky and the savanna whispered hopefully of adventures yet to come.