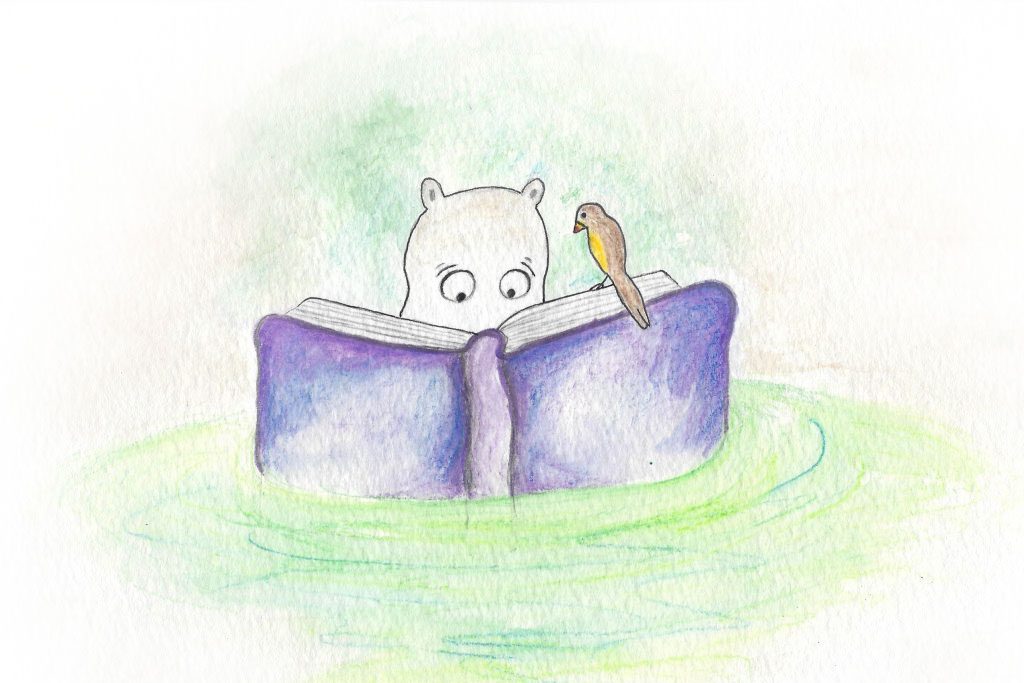 Like Alice in Wonderland, “I can’t go back to yesterday because I was a different hippo then.” Back then, I did what every hippo does. I dozed in the hot sun and wallowed in the swamp all day and chomped on the savanna at night. And, of course, along with all the other animals, I grumbled about you, your cattle, your fences and your plows.

Al and I . . . Oh yes, I forgot to tell you about Al, the omnipresent yellow-billed oxpecker who catches free rides on my head. In any case, back then, Al and I frequently passed the time of day in a pleasant manner on the river, I dozing and trying to grunt at the appropriate pauses while Al kept the conversation going.

One fateful day, I was startled out of my usual languor by the noise of a large motor vehicle. It sputtered and belched a few times, smoke emitting from its nostrils, and then stopped not far from where I bathed. A man climbed up to its mouth, pried it open, and clanked around with some tools. Some time later, another much smaller conveyance arrived and carried him away.

With extreme caution, and against the advice of Al, as well as my own good sense, I approached the vehicle. Even more elephantine than I had thought, it held in its rear end, thousands upon thousands of what I now know to be books.

“Tedious,” thought I, as I turned the pages of several. “Nothing to eat.” And then, most suddenly, my heart skipped as I found myself looking straight into the eyes of a crocodile, albeit miniature, inside of a book. Thereupon began my journey into the adventures of literature.

Starting with books containing pictures of animals I knew. I began to understand the meanings of the strange black markings. So engrossed was I in Belly Up, a mystery about the murder of a hippopotamus, that I uncharacteristically skipped my afternoon nap, and when Al squawked news of humans plowing in the nearby grasslands, I barely heard. He reprimanded me with a well-placed peck between the ears.

I would never find out who had murdered that hippo with a bird pecking my head and screeching in my ears, and I might go deaf. So, in self-defense, I began reading out loud to Al every afternoon. Once again, we passed the days in a pleasant manner, only vaguely aware of the discontent sweeping the savanna.

Then in an instant, everything changed.